Moonfleet is sold. Thanks to help from Duke and the guys at my moorings down Boathouse Lane Moonfleets trailer was salvaged from where it languished in a marsh for years, got towed to Moonfleets new home and got new tyres and its bunks straightened ready for Moonfleets road trip down to Ipswich. Moonfleet and her trailer are now owned by a lovely couple who have an ideal mooring, similar floating pontoon to us but with a pub at the top of the ramp: Off the boat and drinking beer in less than 60 seconds - can't be bad. My boating interest is now pointed at Miss Darcy, a Dawncraft which needs a fair bit of help to move against the wind and I've still got Gesine, which remains at IBTC and is resisting all efforts to get her refloated - due as usual to lack of budget. Jane has opened Beespoke Books to produce custom childrens books. I've started learning to play the flute. That, I think, brings you up to date on my musings.
Posted by tonysmusing at 12:16 No comments:

Lorema is a boat I would love to own. I am not, however, the owner she deserves. Go buy a piece of sailing history. Lorema is for sale

Lorema starred in Leo Sampson Goolden's blog which you can find over at http://sampsonboat.co.uk/. The sale has been forced by him buying something bigger called Tally Ho.

Lost but not forgotten

I have been busy for a few months (more like years - Ed) doing grown up things. Moving back to Lowestoft but working around the UK, trying to get Gesine finished and developing my writing. All of this means this blog has languished so lets get on with bringing you up to date. Over the last year we have finally achieved one of Jane's long-held ambitions, to attend the Edinburgh Fringe and Edinburgh Festival. Thousands of shows, across hundreds of venues with crowds everywhere. In 2 weeks I saw 50 (yes, fifty) shows. Jane has encouraged me to become a theatre monster, devouring shows where-ever we find them. This includes delights from Eastern Angles, shows at Seagull Theatre, Marina and Theatre Royal Norwich. We also spent a lot of 2016 at literary events. This meant we spent half our weekends away from home, not counting the events we reached without overnight stays or nights I spent away working. Overall a year where my wardrobe was suitcase shaped, not something I am keen to repeat. Too much theatre and bookish stuff? Never. But the travel was too much on body and wallet so we are being more restrained this year. We are still busy but concentrating on local events and some cherry-picked further afield. Events which survived the cut include Chipping Norton Literary Festival, NAWGFest and Felixtowe Book Festival. We tried to book late for NAWGs Wentworth retreat having decided late that we would go so Jane could see their wonderful 'dodos' (her pet name for rhododendrons ). Unfortunately we were too late for this year so have already booked for next year. My books are progressing again with my ambition to publish Wolf 2 before Wolf 1. Weird, I know, but Wolf 1 needs a major re-write so 2 is easier to finish (1 hope!).
Posted by tonysmusing at 16:54 2 comments:

Here is a quick shot of Mystery / Gesine in her stunning new red paintwork. She needs more work to be completed but is, pretty much, in floating order. This is a long way from the scruffy green hulk from 4 years ago. 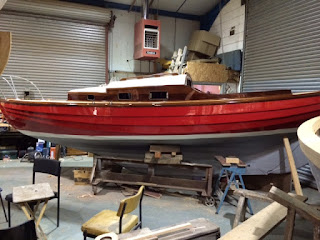 My thanks to the experts at IBTC for all the work completed so far and for permission to use their pictures. 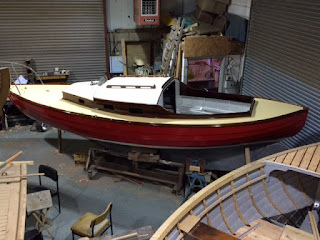 A new summer and I notice my blog has been sorely neglected. Let us take a moment to pause and look back over the last 2 summers. Both feature time spent with my children, both of them growing noticeably between their visits. They are delightful. So how has 2015 been compared to 2014? 2014 saw us do
A single night at NAWG's Open Festival of Writing catching up with friends before a day in London enjoying the sun while my girlfriend slaved away on a course and then a dash down to Nomad Theatre in East Horsley for their last night of Jesus Christ Superstar, which was so awesome I didn't mind getting back to my little flat after partying until gone 3am.
. That gives you an idea of what our weekends are like. The weeks are spent working with occasional jaunts down to local folk clubs and wanderings by the rivers. 2015 has seen another career jump for me, moving back to Lowestoft, going to the theatre to see both amateur and professional productions and occasionally catching up with old friends. Now I am based back in Lowestoft I expect to catch up with Lowestoft Library Writers Group and become active in Lowestoft Cruising Club who granted me membership just before I started working away so I have been a member for a while but haven't seen inside their clubhouse or joined one of their work parties since 2012. Time to go .. work to do.
Posted by tonysmusing at 19:57 3 comments:

I have recently found a blog post pointing to a former owner of Gesine. Ahh, but is it the same Gesine? A quick search will verify that Gesine is a popular yachts name but the descriptions are similar and locations match the rumours I heard. I am awaiting information from Ann, a wonderful author who will hopefully steer me straight. It would be great if she did own Gesine as she went on to buy Peter Duck ( of Arthur Ransome fame ) She mentions that her Gesine leaked above the bunks but as I have had the deck and cabin re-built I am hoping that problem is solved. I will add a link to her blog if it is the correct Gesine. More news soon, I hope. My other boat, Moonfleet, is floating neglected on her moorings. I hope to get out there tomorrow evening to apply her broads licence stickers and maybe give her a clean.
Posted by tonysmusing at 19:56 1 comment:

A weekend of masterclasses and feedback from an assortment of publishers, agents and authors. It's not cheap but it is worth every penny. Take a wander over to The University of Winchester Writers' Festival.
Posted by tonysmusing at 00:28 No comments: